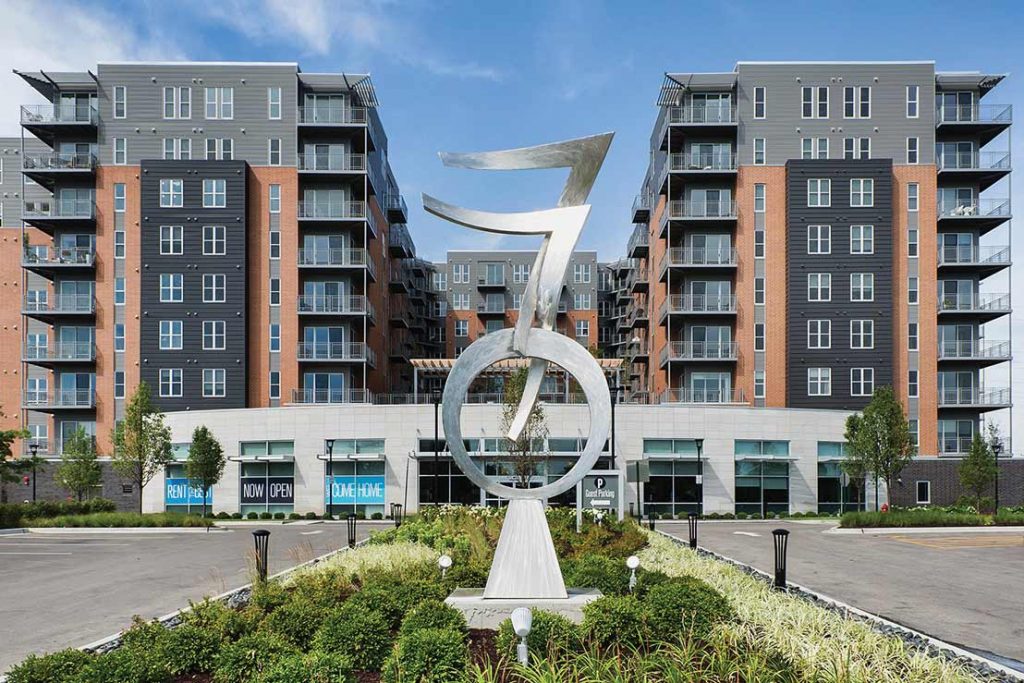 ​The Cook County Board of Review has slashed assessed values on a swath of commercial properties. That’s good news for landlords, but bad news for homeowners.If commercial property owners feel like they no longer have a friend in the Cook County assessor’s office, they’ve still got some at the county Board of Review.For much of the past year, landlords in the northern and northwest suburbs have griped that Fritz Kaegi, who took over as assessor in late 2018, is giving them a raw deal, jacking up their assessments and setting them up for huge real estate tax hikes this year. Many say the increases have had a chilling effect on the local commercial real estate market, scaring off investors and depressing property values.But a new batch of data suggests those worries may be overblown. The Board of Review, where property owners can appeal their assessments, has slashed assessed values on commercial and industrial properties in seven townships in northern Cook County from the high levels set by Kaegi’s office. After granting appeals, the board estimated the assessed value of all the properties at $3.29 billion, down 32 percent—or more than $1.5 billion—from the $4.83 billion value set by the assessor.That’s great news for owners of apartment, industrial, retail and other buildings. They’ll pay less—a lot less, in some cases—in taxes than they would have without the board’s intervention.”We’re very happy about it,” says apartment landlord Stuart Handler, CEO of Chicago-based TLC Management. “We hope that it will be a trend that will continue.”But the reductions are bad news for north suburban homeowners, shifting more of the property tax burden onto them.”Thousands and thousands of citizens are going to be paying considerably more than they should because of the Board of Review,” says retired Cook County Clerk David Orr.POLITICAL IMPLICATIONSThe board’s recent actions also have broader political significance in an important but poorly understood corner of county government that Kaegi wants to reform. His predecessor, Joe Berrios, was accused of favoring big commercial landlords and their property tax appeals attorneys, many of whom donated to his campaign fund.

Kaegi, who unseated Berrios, has refused donations from the tax-appeals bar and hiked assessments on commercial and industrial properties, part of his push to fix what he believes is a broken and unfair assessment process. He contends his valuation methods are superior to his predecessor’s.But Kaegi’s influence ends at the Board of Review, which is led by three elected commissioners, all of whom accept donations from property tax appeals attorneys. Until the Board of Review is reformed, the assessment system will still be stacked against homeowners, Orr says.”I see the Board of Review as a longtime pay-to-play culture,” he says.The recent assessment data “raise very serious questions,” Orr says. “I’m not sure that the Board of Review is very different from Berrios.”Board Commissioner Michael Cabonargi, who is campaigning for clerk of Cook County Circuit Court, disputes that characterization.”This isn’t the Board of Review that David Orr may remember from 30 years ago,” he says. “The modern Board of Review under my leadership has an ethics policy, an ethics office and a digital appeals processing system that provides transparency and professionalism.”When it comes to assessments, Kaegi is from Mars and the Board of Review is from Venus. Assessments are the first step in a complicated process that determines how much the owners of 1.8 million parcels in Cook County pay in real estate taxes each year. The assessor’s office reassesses properties on a three-year cycle: After valuing the northern suburbs last year, Kaegi’s office is assessing the south suburbs this year before moving on to the city in 2021.If homeowners or landlords think the assessor has overvalued their properties, they can appeal first to the assessor’s office. If they aren’t satisfied there, they can then make their case to the Board of Review. The board is still processing appeals for the northern suburbs, but it has released final assessment data for seven out of 13 townships there: Evanston, Barrington, Maine, New Trier, Northfield, Norwood Park and Elk Grove.The board rewarded some landlords with generous reductions. After Kaegi’s office valued a 47-unit apartment building in north Evanston at $15 million, the property’s owner appealed to the Board of Review, which cut the assessment to $11.8 million. That’s 57 percent less than the $20.5 million that the owner paid for the property in August 2018.In Northbrook, an investor paid $118 million in September 2018 for a 347-unit apartment building next to the Edens Expressway. The assessor valued the property at just $92.3 million, but the Board of Review whacked the assessment even more, to $68.1 million.The difference on a macro level is stark, too. Under Kaegi’s office, the total assessed value of all commercial and industrial property in the townships rose 98 percent, to $4.83 billion, from 2018 to 2019. After appeals at the Board of Review, the assessed values rose just 35 percent, to $3.29 billion.”Even with our relief, our revised assessments were considerably higher than the previous assessments,” says William O’Shields, the board’s chief deputy commissioner. 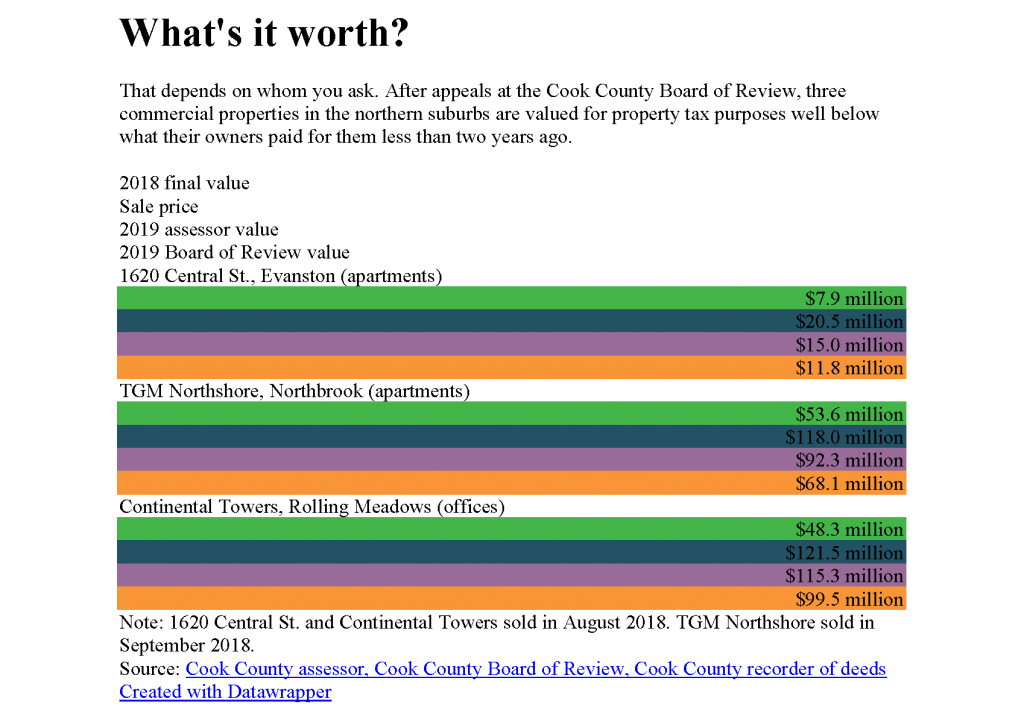 Residential assessed values, meanwhile, rose 13 percent from 2018 to 2019, to $7.29 billion, under the assessor. But the board reduced that increase slightly to 9 percent, or $7.06 billion. The total assessed value reflects the estimated market value of properties after adjustments for the property type: Homes, for instance, are assessed at 10 percent of their full market value, while most commercial properties are assessed at 25 percent.RELATIVE VALUESThough assessments rose for both residential and commercial real estate in the townships, what matters for property tax purposes is the relative change in value. Because commercial and industrial values rose more than residential values, the tax burden will shift this year toward commercial landlords.Commercial and industrial properties accounted for 40 percent of the total assessed value in the seven townships under Kaegi’s assessments, up from 28 percent before he took office. But the Board of Review’s cuts have reduced that share to 32 percent.In other words, commercial and industrial landlords still will shoulder a higher tax burden than they did last year, but not as much as they would have. They won’t know exactly what they’ll pay until they receive the second installment of their tax bills this summer.Who’s right, the assessor or the Board of Review? There’s no simple answer to that question. Assessments have risen so much under Kaegi mainly because of the way he uses a key valuation metric, called a capitalization rate, or cap rate. In the valuation process, a high cap rate translates into a low value. Kaegi uses lower cap rates than Berrios did, contending they are more in line with what actual investors use to value properties.Kaegi’s office and the Board of Review also differ over how they account for property tax costs in the valuation process. Kaegi plugs in a cost estimate, while the board factors the expense into its cap rate.”We have not done a full analysis of the Board’s work thus far,” a Kaegi spokesman writes in an email. “So we don’t yet know why they have made these adjustments. Overall, we feel confident in our work and in the extensive documentation of our methodology posted on our public-facing website.”The wide gap could have political implications for Cabonargi, one of four Democrats competing in the March 17 election for Circuit Court clerk. The reductions could also be a topic of debate in the Democratic primary to pick a challenger to Republican Dan Patlak, a Board of Review commissioner who is up for re-election in November. One of the candidates: Abdelnasser Rashid, a former Kaegi aide.

SIDEBAR: How different officials come up with such different numbersHow can county officials who get paid to value properties disagree so much on what a commercial building is worth?It’s complicated. Assessor Fritz Kaegi shook up the assessment system last year with his use of one key variable: the capitalization, or cap, rate. A cap rate is a rate of return that investors and appraisers use to value commercial properties. It represents a property’s net operating income, or NOI, divided by its price. After estimating a property’s NOI, an assessor can divide it by a market cap rate to calculate a value. The lower the cap rate, the higher the value.Contending that his predecessor, Joe Berrios, used excessively high cap rates, Kaegi began valuing commercial properties last year using lower ones. Commercial assessments jumped. In Evanston, for instance, Kaegi’s office used a median cap rate of 6 percent on apartment buildings, down from 11.95 percent under Berrios. At those rates, Kaegi would value a property with $5 million in NOI at $83 million, versus $42 million for Berrios.So who’s right? Cap rates vary by location and property class, so picking the right rate involves both art and science. But Kaegi’s rates are closer to what actual investors use: The average Chicago-area apartment cap rate was 5.7 percent at the end of 2019 and hasn’t been above 7 percent since 2009, according to New York-based Real Capital Analytics.But why is the Board of Review slashing commercial assessments on appeal? One reason: The board and assessor’s office differ in how they account for property taxes during the valuation process. The assessor simply plugs in the prior year’s property tax expense when calculating a property’s NOI. The assessor, who is required to value properties as of Jan. 1 in an assessment year, doesn’t try to predict a property’s future taxes.Some landlords argue that approach fails to address a circular math problem and overvalues buildings. A property’s current value should reflect the higher real estate tax they will pay after their assessments go up, they say. So landlords favor using a “loaded cap rate,” accounting for future property taxes by adjusting the cap rate higher. The Board of Review embraces that method as well. The board excludes property taxes from its NOI calculation but loads the cap rate by adding an estimated tax rate to it. One weakness: It’s hard to predict what the future tax rate will be.A 47-unit apartment building at 1620 Central St. in Evanston illustrates how loaded cap rates work. The Board of Review started out with a 6 percent cap rate for the property but then added another 2.74 percent tax load, resulting in a loaded rate of 8.74 percent. The load represents a 49 percent property-tax increase, to $324,227.While assessor valued the building at $15 million, the Board of Review cut that to $11.8 million. That outcome couldn’t be much better for the property’s owner, Chicago-based Highlands REIT: It paid $20.5 million for the building less than two years ago.